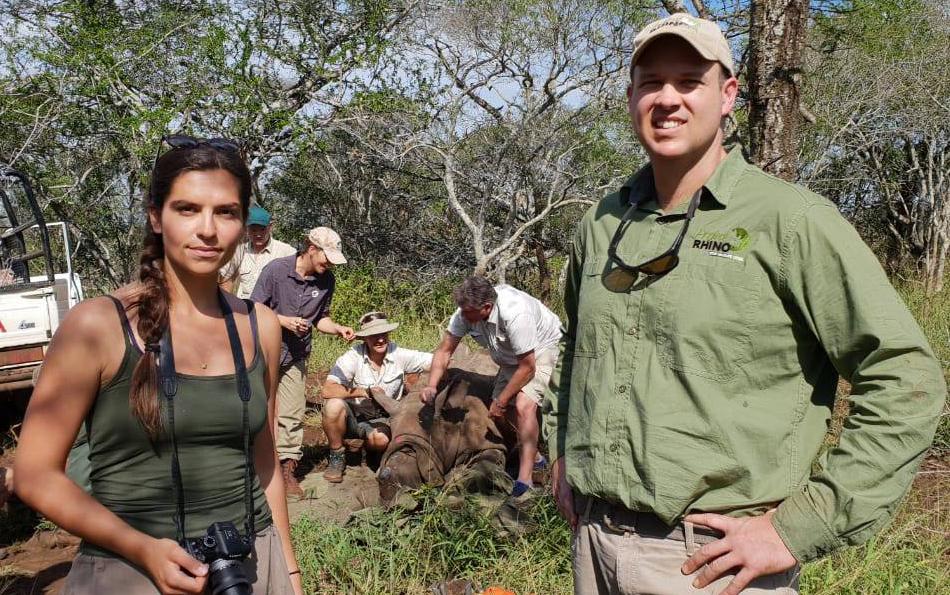 As I mentioned in my previous blog, in May I was lucky enough to visit South Africa and attend a media trip with Project Rhino to see first hand how much effort is going into the fight against rhino poaching and wildlife crime.

One the methods that I will never forget was the dehorning of white rhino in a game reserve in KwaZulu-Natal (KZN), South Africa.

On Thursday 17th May, we were taken to Somkhanda Game reserve to understand the conservation approach of dehorning rhino. The night before, we sat around a braai and debated the poaching crisis and the pros and cons of different anti-poaching methods.

Dehorning is seen as one of the most extreme and invasive anti-poaching measures and one that I wasn’t sure I wanted to see. However, after learning more about the grave situation rhinos are facing in South Africa, I began to understand this drastic but effective approach.

The next day (after a very early start), the team set off to the location of two white rhino armed with a dart gun in a helicopter and game vehicles packed with chainsaws and equipment.

After the team of dedicated and skilled trackers located the rhino, the very experienced vet, Dr Mike Toft, shot a powerful cocktail of drugs into the rhino’s rump from the helicopter hovering two meters above.

After a few nervous minutes, we watched the 2000kg rhino slow, stagger and sink to the ground. I was surprised to see that although immobilised, the rhino was always conscious and continued to breathe heavily from its nostrils and twitch its delicate ears whilst the team prepare it. Blindfolds and earmuffs were placed on its head to reduce the noise and stress during the dehorning activity whilst DNA samples were taken and new trackers were fitted to the rhino’s ankle.

After quickly marking up the ideal cutting point, Dr Toft fired up a large chainsaw and cut both horns off in a quick and painless procedure.

Despite knowing it was in the animal’s best interest, it was still hard to watch. The procedure was noisy and violent but Dr Toft insisted it is no more painful than trimming your fingernails if done correctly. After all, rhino horn is made of keratin, which is the same type of protein that makes up hair and finger nails.

The remaining stump was sprayed with purple antibacterial solution and the vet administered the drugs to wake the rhino whilst we all hurried back to the safety of the vehicle to watch what happened next.

It was amazing to see that within minutes the rhino stood up, looked around curiously and began casually grazing like nothing had happened.

The whole procedure took under five minutes to be completed. The speed, care and precision of the whole process was hugely impressive.

This was the first of eight rhinos successful dehorned that day by the extremely skilled and hardworking team.

Dr Toft told us he has removed close to 1,800 horns from 900 rhinos in the past three years and all the team acknowledged that dehorning is not a permanent or ideal situation but a desperate measure designed to keep these animals alive.